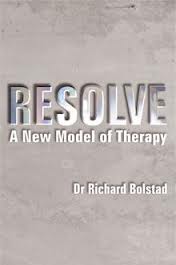 Dr Richard Boldstad “Perhaps the most frequent criticism levelled at NLP in psychotherapy has been that it fails to understand the importance of the therapeutic relationship. I believe that, on the contrary, NLP psychotherapy has its foundation in a new and innovative framing of this relationship. It is educative and consultative rather than ‘therapeutic’. Its focus is on empowering rather than nurturing, transforming rather than merely ‘holding’.” (Resolve, pg. 194)

Resolve, A New Model of Therapy, from Richard Bolstad arrives definitely within my top ten books to read. Backing up his writing with existing research, the author presents RESOLVE, the model of therapy he created while working with many PTSD cases, where R-Resourceful state for the practitioner, E-Establish rapport, S-Specify the outcome , O-Open up the client’s model of the world, L-Leading, V-Verify the change, E-Ecological Exit process. The first chapter leads us to a nice understanding of NLP, then followed in chapter 2 by a review of the available interventions the NLP practitioner can use, and last the RESOLVE model. A very strong point of the book is the back up of information with research. NLP is often cited as non-scientific. While research does actually exist already, it is simply not called NLP research and has often appeared within the realm of the psychotherapy world; Richard Bolstad, with his book, assists in putting forward the existing data.

This site uses Akismet to reduce spam. Learn how your comment data is processed.

Self-leadership and the Spirit of H2O

Truly believing in people having all the resources they need to achieve what they want in their jobs and their life, and enjoy a successful life. Truly believing in the power of Humor, Horizon and Openness to get our lives at the top. Truly believing the sun will rise in the morning and the words you choose will change your life. @talking4good.com – powerful conversations for powerful actions.

Unless stated, all visuals used are based on creative common images or talking4good images/drawings. We are happy for you to copy, display and use our work, as well as creating derivative works from our images, words and videos, as long as this is not for commercial use and you gave us credit when you do so as well as inform us (you can use our contact form below). If you notice an incorrect source listed or missing, thank you for letting us know. © 2011-2019 Copyright Talking4good.
Website Terms of UseWordPress.com Users’Site Privacy PolicyWordPress.com Cookie Policy.